Christmas in Vienna: Advent Music to put you in the Spirit of Christmas: 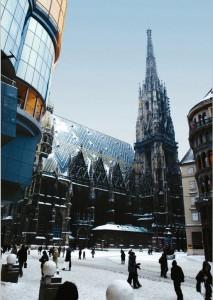 There’s nothing like Christmas carols, Advent choirs and the sound of trumpets to get people into the spirit of Christmas. And in Vienna visitors can get in the mood for Christmas with Advent music at some of the city’s most beautiful churches.

Enjoy an Advent concert series in the stunning Baroque Annakirche in the heart of Vienna.  Hear music by Vienna’s greatest composers including works for trumpet by Mozart, Bach, Schubert and Haydn.

Karlskirche (St. Charles’s Church), on the south side of Karlsplatz, is one of the most outstanding Baroque churches north of the Alps. With its prominent dome and towering columns, Karlskirche is a vital part of Vienna’s architectural landscape. It still functions as a Catholic church and is also a popular venue for classical concerts. Enjoy a wonderful performance of Vivaldi’s The Four Seasons in this most outstanding Berlin church.

The Minoritenkirche is one of the oldest and most artistically significant churches in Vienna. This French cathedral Gothic style church is a popular venue for Advent concerts. ‘Trumpets in Concert – A very special Christmas’ has been a festive and emotional highlight of the Christmas season in Vienna for over 20 years.

In this highly-anticipated concert, hear the sounds of classical music by Schubert, Händel, Bach, Vivaldi and Haydn at Vienna’s treasured and world-renowned Kapuzinerkirche.

The Baroque St. Peter’s Church is located in the heart of Vienna. The crypt of this church provides an ideal atmosphere to enjoy classical music by Mozart, Beethoven, Bach, Schumann,  Christmas carols as well as operas.

For the complete list of Christmas and other concerts in Vienna see Here.