The Original Sacher-torte at Hotel Sacher in Wien: 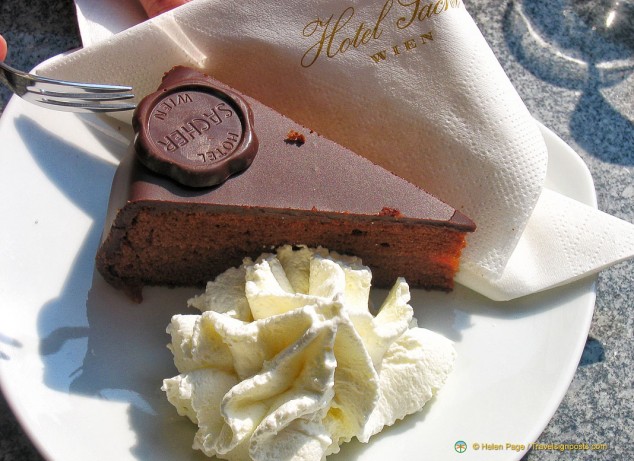 If you love chocolate cakes or anything with a sense of tradition, history or originality, then make sure you allow time on your Austrian holiday to savour the Sacher-torte in the country where this world famous chocolate cake was first created.

The story behind the creation of the Sacher-torte

The creation of this dessert has a nice story behind it:  In 1832, Prince Metternich (an Austrian statesman) ordered his court kitchen to create a special dessert to delight some fastidious high-ranking guests who were attending his reception. The Prince warned his chef to take special care and ensure that he is not embarrassed by any sub-standard production.  Tragically, his chef fell ill (probably due to stress) and it then fell upon his 16-year-old apprentice Franz Sacher to dream something up.  Young Franz Sacher baked a soft and fluffy chocolate cake with a nice flavoured apricot jam under the icing.  His cake was a resounding success with Prince Metternich and his guests, and thus the Sacher-torte was born!

Franz Sacher’s successful cake opened career doors for him.  He spent his apprenticeship working for the Count of Esterhazy, first in Bratislava and then in Budapest. When he became fully qualified as a chef, he began his own business and started baking his cake on a larger scale. Success followed and very soon the “cake by this man named Sacher” was in great demand, leading to the one of the most famous cakes of all time. Up to this day, hotel cafes, coffee shops and restaurants the world over still offer this treat in their dessert menus.  Yes, and I admit to having devoured Sacher-tortes in the coffee shops of five-star hotels around Asia and Europe.

The original recipe was a well-kept secret of the Sacher Hotel and only the Original Sacher-Torte is produced according to this original recipe. You’ll nevertheless find many recipes online that claim to produce just as good a result. The basis is a chocolate cake, thinly coated by hand with best-quality apricot jam and this is topped with chocolate icing, being the crowning glory. The Original Sacher-Torte tastes best with a serve of unsweetened whipped cream and to complement this is a nice “Wiener Melange” or coffee with milk.  Whether you’re in Vienna, Salzburg, Graz or Innsbruck, head for the Original Sacher Cafés and you’ll be able to treat yourself to this famous cake.  It’s not just about enjoying the original cake, but also to experience Austria’s traditional coffee-house culture with the Sacher flair.

What if you’re not planning an Austrian holiday?

Those not planning to travel to Austria, need not miss out! Would you believe that you can actually order one of these famous cakes, and many other Sacher products, online and they’ll be delivered to you anywhere in the world by DHL?  Yes, I was tempted until I checked that the freight cost to my end of the world is three times the cost of the cake! Anyway, if cost is not an issue and you have some ‘fastidious high-ranking guests for dinner’, this could be a nice dinner conversation piece.