You are here: Home / News & Events / Pandamania at Schönbrunn Zoo 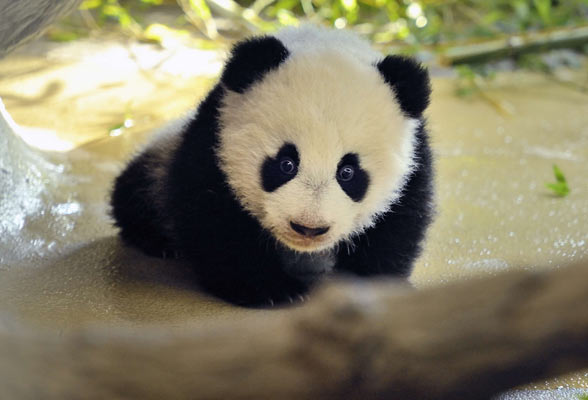 The moment that panda fans have been waiting for. Fu Hu, the cute baby panda has made his way into his enclosure at Schönbrunn Zoo. So after much anticipation, visitors to the zoo can now see this little ball of fluff up close.

Born on August 23, 2010, Fu Hu spent the first few months of his life safely cocooned in his cubbing box. Steps have been taken to childproof his new outdoor space – soft, fresh straw have been spread on the ground beneath the tree trunks on which Fu Hu will make his first attempts at climbing. His keepers say that the best chances of seeing Panda Fu Hu is around midday, although there is no guarantee as to when – or even if – the panda cub will put in an appearance. Like any newborn, Fu Hu still spends the best part of the day sleeping happily in his cubbing box.

Fu Hu’s parents, Yang Yang and Long Hui, are Schönbrunn Zoo pandas. Fu Hu was born three years to the day after big brother Fu Long. When Fu Long was born in 2007, it caused a media sensation as he was the first naturally conceived panda to be born in a European zoo. And now the endangered pandas have repeated the feat at the Vienna zoo with the birth of Fu Hu.

As part of an agreement between China and Austria, Fu Long was moved to a new panda habitat in China on November 18, 2009. Fu Hu too will one day be moved to a panda habitat in China. Like every giant panda, Fu Hu is in fact owned by the People’s Republic of China, but for the next two years at least he will remain in Vienna. So panda fans have two years to enjoy this new panda.

Although Fu Hu is undoubtedly the star of new arrivals at Schönbrunn Zoo, he is not the only newborn at the world’s oldest zoo: a two-toed sloth is currently the youngest of the new arrivals. Baby elephant Tuluba (also born in August 2010) and Poitou donkey foal Richelieu are extremely popular with visitors. Vienna zoo’s Rockhopper penguin breeding program is another major success story – in early 2010 Schönbrunn welcomed 10 chicks of this highly endangered species into the world.