Musikverein Is Home To The Wiener Philharmoniker: 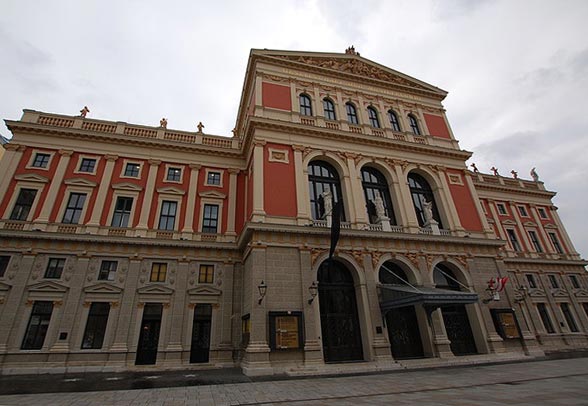 Vienna’s concert hall, the Musikverein, is well known to music lovers the world over. For it is from the Große Musikvereinssaal, or Goldene Saal (Golden Hall) that the city’s legendary Wiener Philharmoniker New Year’s Concert is broadcast to over 50 countries each year.

The Wiener Musikverein is the centre of Viennese musical culture. This is where visiting international orchestras perform when in Vienna. It is located in Karlsplatz just behind the Hotel Imperial. The Musikverein is also the home of the Vienna Philharmonic.

The Wiener Musikverein was built by the Gesellschaft der Musikfreunde (Society of Music Lovers) on land that was given by Emperor Franz Joseph. Its inauguration took place on January 6, 1870. There are several halls and auditoriums in the building. The one that is internationally recognized by music lovers is the Golden Hall, venue for the Wiener Philharmoniker New Year’s Concert . The rectangular Große Musikvereinssaal measures 48 metres long and 19 metres wide. It seats 1,744 people and has standing room for 300.

The Musikverein is famous for its acoustics and ranks amongst the finest concert and opera venues in the world, even though none of its halls were built during modern times or with the application of today’s acoustics science.

Being at the Vienna Philharmonic New Year’s Concert may be a dream for many (myself included). But even if you’re not in Vienna at New Year, the Vienna Mozart Orchestra performs a series of Vienna Mozart Concerts at the Musikverein from April through October each year. There are four weekly performances as well as a Mozart V.I.P. experience.
See what’s on and book your Mozart concert tickets here.>

Search for hotels near the Wiener Musikverein, read hotel reviews and book your Vienna hotel here.>