You are here: Home / Sightseeing / Schönbrunn Palace – a Baroque Work of Art

Schönbrunn Palace – Once the Summer Residence of Hapsburg Rulers: 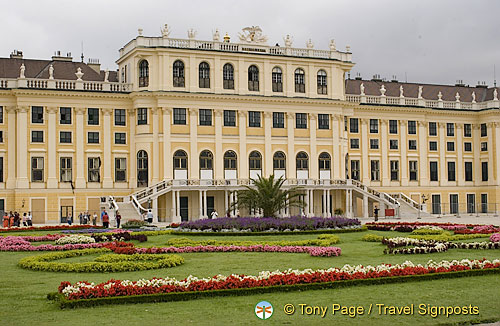 The former summer residence of many a Hapsburg ruler, Schönbrunn Palace, is one of the most important cultural monuments in Austria. This Baroque work of art remains one of Vienna’s top tourist attractions. It’s not hard to see why.

First used as hunting grounds, the current palace was begun in 1697 and completed in 1749. It’s an enormous building with two giant wings and a prominent entrance done in a Rococo adaptation of the classical style common at the time. Of the over 1,400 rooms only 40 are open to the public which can be covered in a Grand Tour of Schönbrunn Palace. But even this small percentage provides a fascinating visit.

A tour of the ceremonial and state rooms and apartments of this royal palace gives a peak into what life was like for the imperial family.

In the Hall of Mirrors the six year old Mozart performed for the Empress Maria Theresa in 1762, thus kicking off his Viennese career.  A few times a week Mozart’s famous opera “The Magic Flute” delights audiences of all ages at the Schönbrunn Palace Marionette Theatre.

The Congress of Vienna, which played a role in settling affairs after Napoleon’s defeat in 1814, was held in the Grand Gallery. Both rooms, and many others, are the equal of their historic roles.

Even the Breakfast Pavilion is a wonder of period architecture. A smallish structure compared to the huge palace, this round building nonetheless is a delight to the eye. Sporting high windows and large arched entrance, the bright yellow facade is capped by a copper crown that provides a lovely contrast. Here you can enjoy a rest and a drink at the tables inside or out whilst enjoying the view. 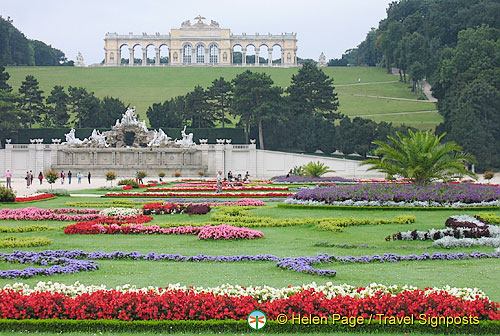 Speaking of views, one of the most popular parts of the palace are the grounds, housing sculpture and gardens and capped by a structure known as the Gloriette, built in 1775.  Sitting atop a high hill, and now housing a fine cafe, it provides a spectacular view of the surrounding area and the main palace, along with other parts of Vienna.

Naturally, every Hapsburg prince had to have his own Roman ruins, so some were created on the grounds. Erected in 1778, it was originally known as the Ruin of Carthage, but bears little resemblance to that more famous site. It surrounds a Roman-style pool that is covered by an enormous arch set on top of high walls. Stone fragments are scattered around to complete the faux appearance of an ancient decaying building. Nearby is an Obelisk Fountain that is well worth a look.

Schönbrunn also offers an experience that is familiar to visitors of any major city – a zoo. But, this being Vienna, the example is quite a bit different from the ordinary animal park. The Schönbrunn Zoo is the oldest in the world, having been established in 1752. It was first opened to the public in 1779. The first giraffe arrived in 1828, decades before others elsewhere.

Though it began life as a means of housing the Imperial menagerie, it has grown to be one of the preeminent public zoos in the world. It offers a simulated rainforest, an aquarium, and a polarium to house Arctic species (opened in 2004). In August of 2007, it achieved the first natural insemination of a female Panda. The same year saw the birth of an anteater, an armadillo, and the latest giraffe.

Over 300 years after its beginning, Schönbrunn Palace continues to be a wonder not only of Vienna but the whole world.