You are here: Home / Sightseeing / A Mozart and Strauss Concert is a Must-do in Vienna 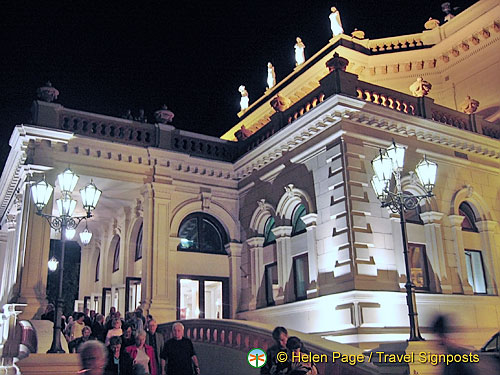 Mozart and Strauss Concert at the Kursalon

Not everyone’s privileged enough to attend Vienna’s highly sought after New Year’s Eve concert, but when you’re in Vienna, you should attend at least one of their many classical music concerts.

As you wonder around town, you’ll come across many Mozart look-alikes, all wanting to sell you tickets to concerts held at various concert halls around town.  Unless you know where these concert halls are and who’s performing, it’s best to get recommendations from your hotel’s concierge.

The Kursalon Wien is one such concert hall where you can enjoy Strauss and Mozart music performed by the Salonorchester Alt Wien.  They have concerts here almost every night and tour companies bring their guests here.

The Kursalon was constructed in the mid 19th Century in the Italian Renaissance style as part of the city’s expansion program.  Emperor Franz Josef I had given a directive that the old fortifications should be razed to the ground, and the Ring Boulevard be built to facilitate the necessary expansion of the city. The adjacent City Park which was opened in 1862 was laid out in the style of an English landscaped park.

Johann Garben had intended for the Kursalon to increase the recreational value of the City Park by offering curative waters to drink. However, when the building was completed in 1867, plans for its usage changed and in 1868 the first concert featuring compositions by Johann Strauss took place. The Kursalon, with its dances and promenade concerts, quickly became a popular meeting place for Viennese society, who were keen on their waltz and joie de vivre.

These days the four ballrooms on two floors are available for rental for weddings and any other events.  Its large terrace has views over the City Park and if you attend any of the concerts here, you’ll have the opportunity to have a drink on the terrace at interval time.

See what’s on in Vienna (and other European cities) and book online through our partner Classictic here.
See our Kursalon photos HERE