The Hills are Still alive with the Sound of Music! 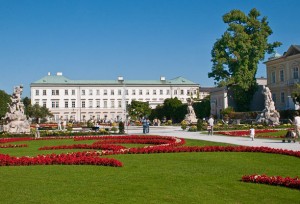 Fans of the Sound of Music movie will love being in Salzburg as here you’ll be able to visit some of the film locations and re-live the movie. Many tour companies do a one day tour of Salzburg, visiting some of the main film locations.  It’s astounding that these tours are still incredibly popular with overseas visitors in spite of this being a 1965 movie.

We went along on a tour and met some Sound of Music fanatics, one American couple claiming to have seen the movie 14 times!

A great benefit of doing the tour is that it takes you to many famous sights of Salzburg.  Following are some of the tour sights:

Mirabell Gardens and Mirabell Palace – At the Garden steps and around Pegasus Fountain is where Maria and the children sang ‘Do-Re-Mi’. As you leave the Garden grounds you will pass through a gateway where two stone figures arch across the gate. This was featured in the movie as well.  Read more about Mirabell Palace and Gardens here.>

The Residenz contains some 180 rooms and three spacious courtyards and it was from here that the the prince archbishops of Salzburg held court and controlled the destiny of their country up to the 19th century. Today the Residenz is the venue for official receptions, meetings and international conventions.

St. Peter’s Cemetery – It was here that the dramatic flight scenes were filmed. Maria and the children hid at the chapel before their escape.

This is one of the oldest and most charming cemeteries in the world and it’s no wonder that it was selected as a film location. Many of Salzburg’s dignitaries, artists, scholars and merchants are buried here. One of the cemetary’s special attractions are the ‘catacombs’ hewn out of the Mönchsberg rock.

Acquired in 1736 by Leopold Anton Eleutherius Freiherr von Firmian, Prince Archbishop of Salzburg. He named the Palace Leopoldskron, meaning Leopold’s crown. The Palace passed through the hands of many owners since 1736, but Schloss Leopoldskron’s transformation was the most dramatic from 1918, during the time of Max Reinhardt. Max, a theater director who was famous throughout Europe, had a passion to restore the palace to its original splendor and invested large sums of money. Today Leopoldskron Palace is privately owned and has, since 1947, been in the ownership of the American educational institution Salzburg Global Seminar, which has been addressing global issues for more than half a century.

The Sound of Music Pavillon – can be found at Hellbrunn Palace today, in the movie it was still located at Leopoldskron Palace. One of the most famous and romantic scenes was filmed here: ‘I am 16 going on 17’

Other locations outside of the city where filming took place include at Anif Palace, Hohenwerfen Castles, Mondsee, Fuschl, St. Gilgen and Lake Wolfgang.

Mondsee was the only out of town location we stopped at. At Mondsee Cathedral Baron von Trapp and Maria were married.

Mondsee is a small touristy lakeside town within easy reach of Salzburg. The Cathedral is the town’s main structure and just across from the Cathedral are colourful hotels, pubs and the famous buildings with wooden balconies.

For more photos of this tour, visit our Salzburg Photo Gallery.