You are here: Home / Sightseeing / Hofburg – Imperial Palace and Residence of the Habsburgs

Hofburg Palace was the Residence of Habsburgs for more than Seven Centuries: 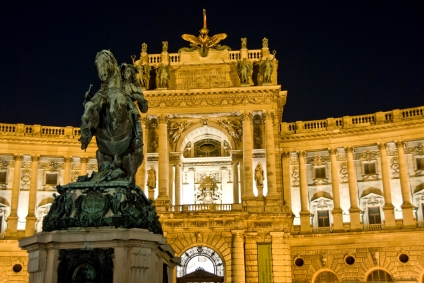 Vienna’s Hofburg (Imperial Palace) was the seat of the great Habsburg empire for more than seven centuries. Dating back to the 16th century and until 1918, Vienna Hofburg was the family residence of many of the Habsburgs, successive rulers of the Austro-Hungarian empire. Built over a period of several centuries, the complex incorporates styles ranging from neo-Gothic to Classical Revival to Baroque to many that have no known name. The entire complex of buildings holds over 2,600 rooms.

Set in the centre of Vienna, the earlier parts surround a large courtyard called the Swiss Court, named after the mercenaries who stood guard there. Access to it is gained through a huge gate called the Michaelertor under a golden dome that is well worth a look. Inside there are several statues of the Habsburgs that you’ll want to explore.

Among the many outstanding sights available to visitors are the former Imperial Apartments. The modern word doesn’t begin to convey the grandeur that was once an ‘apartment’. Here, the Emperor Franz Josef and his wife, the Empress Elizabeth dressed or retired for the day. It must have been no small pleasure to do so given the surroundings.

Visitors can get an idea for themselves by seeing their portraits by Winterhalter. Sissi, as she was known to royal and commoner alike, looks very relaxed and at home with her hair flowing freely. Another shows her dressed in a white ball gown with her hair formally coiffed and decorated with stars. Franz Josef looks on from the next painting, resplendent in his red and white military uniform.

Even the Habsburg children get their turn, as several items reveal what life must have been like for them. Many of their toys are on display. One of Sissi’s rooms nearby exhibits some of her exercise equipment, a novelty at the time.

Another interesting location is the Imperial Court Chapel, a room that is more or less the official home of the Vienna Boys Choir. An organization dating back five centuries, many famed composers have early in life been part of it, including Haydn and Schubert. One musical score used by the latter is inscribed in his hand, in German: “F. Schubert has crowed for the last time.”

Don’t miss an opportunity to visit the Treasury, called Schatzkammer in German. Here visitors can see many of the crowns used by rulers of the Austrian empire, along with silver plates and cutlery, and more. The oldest crown dates back to the 10th century. One particular item of note is a gold and bronze centerpiece used as a table decoration during banquets. It’s 33 meters (108 feet) long!

Not far away is the famed Spanish Riding School, the Lipizzaner. On the other side is the National Library (formerly the court library), and Neue Burg, which houses hundreds of suits of armor and weapons, is also part of the complex.

The two magnificent halls, the Festsaal and the Redoutensaal, of the Vienna Imperial Palace, provide the appropriately grand setting for royal functions. It was here that the Emperor held gala dinners and royal balls for his audiences. The Redoutensaal has a tradition that dates back over 300 years! Originally built in 1705 as an imperial opera house, no other concert hall in the world has witnessed so many historic performances by Mozart, Salieri, Beethoven, Paganini, the Strauss family and other notables. Today, music lovers have the opportunity to listen to music by these master composers in these magnificent halls. The Wiener Hofburg Orchester performs at the Palace from May through October.

It’s not possible to cover the Hofburg in one visit, but by the time you’ve finished a tour of the area, you’ll have a good feel about the members of the royal court and their lifestyle.