You are here: Home / Sightseeing / Mozarthaus – The Only Surviving Mozart Residence in Vienna 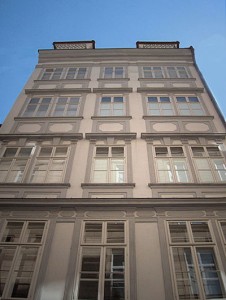 Mozarthaus at Domgasse 5 in Vienna’s Aldstadt is the only one of Mozart’s apartments in Vienna that still exists today. Mozarthaus was not the first of Mozart’s residences in Vienna. When he moved into this luxurious apartment on 29 September 1784, he had already been living in Vienna for three years, and had been married to his beloved Constanze for two.

A Prolific Time at Mozarthaus

When Mozart moved to Vienna, he had worked his way up from an unemployed artist to a respected and prosperous pianist, composer and music teacher. His time at Mozarthaus is thought to have been his happiest and most productive part of his Viennese period. He lived here in grand style to 1787 and Mozarthaus was certainly the longest place that he had ever lived at.

It was at Mozarthaus that Mozart composed eight important piano concerti, chamber music works, a horn concerto, the “Masonic Music”, the Goethe song “Das Veilchen”, the cantata “Davide penitente”, the comedy “The Impresario” and the famous opera “The Marriage of Figaro”. On top of this, Mozart also gave numerous concerts, threw wild parties and hosted illustrious colleagues.

Some of the famous visitors and friends who visited Mozart at this building included:

Mozarthaus is not far from St. Stephen’s Cathedral in Vienna’s Aldstadt. Visitors to Mozarthaus can learn all about this much-loved composer during the time when he lived in this building, his most important works and get to know the family, friends and foes who surrounded him in late-Baroque Vienna.  His life and works are presented on four levels of exhibition space and on the first floor you will be able to visit the actual apartment where he lived.

Mozarthaus is managed by Wien Museum and there is a range of special exhibitions, educational programmes and museum tours and events that visitors can enjoy here.

Enjoy a Journey to the Past: Concerts in Mozart’s House Here >