You are here: Home / Sightseeing / St. Peter’s Abbey – The Oldest Monastery in Austria

St. Peter’s Abbey – One of the Oldest Monasteries in Austria: 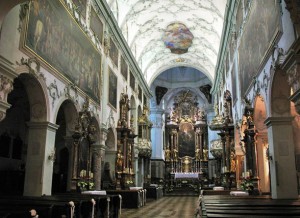 One of the oldest Benedictine monasteries in Austria and perhaps in the German-speaking nations is St. Peter’s Abbey (Erzabtei St. Peter) in Salzburg.

St Peter’s monastery was originally founded by St Rupert, a Franconian missionary, who came to Salzburg around 696 AD. The central attraction of the monastery is the St Peter’s Church.  The present church building was constructed during the Romanesque period and then completedly renovated in the Baroque style in the 17th and 18th  centuries.

Mozart often directed the orchestra and choir at this Abbey and played its organ. He premiered his famous Mass in C Minor at St Peter’s in 1783, with his wife Constanze singing the lead soprano role. As part of the Salzburg summer music festival in August the Mass in C Minor is traditionally performed here.

Mozart’s most renowned Piano Sonatas can be enjoyed in this historic church  throughout the year.

What to see inside St Peter’s

Visitors to St Peter’s will see a blend of architectural styles inside the abbey church. The basilica’s three aisles reflect  its Romanesque architecture but it is the ornate Rococo decoration of the 1770s that dominate.  Behind the Rupert altar is the Felsengrab, where St. Rupert is believed to be buried.

Some of the art treasures in the church include altar paintings by Kremser Schmidt.  In the left chancel is the Salzburg Madonna from the early 15th century and in the side chapel by the entrance one can see the Flight into Egypt and the Massacre of the Innocents.

The famous St. Peter’s Cemetery is in the grounds of the Abbey.  Next to the Abbey is the legendary St. Peter Stiftskeller. Founded a thousand years ago by the abbey’s monks, it serves traditional Austrian food at reasonable prices and is another place where visitors can enjoy Mozart Dinner Concerts.