You are here: Home / Sightseeing / St. Peter’s Cemetery – A Famous Landmark in Salzburg 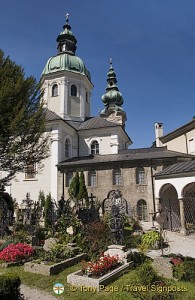 Cemeteries are not usually places that one would include in travel itineraries, but St. Peter’s Cemetery in Salzburg is an exception. Set in the grounds of St Peter’s Monastery, it is said to be one of the most beautiful and oldest cemeteries in the world and it is also an important part of Salzburg’s history. This Salzburg cemetery is also a Sound of Music site that fans of this movie will be interested in.

St. Peter’s Cemetery is the final resting place for a number of Salzburg citizens associated with Mozart and the music world.    Mozart’s sister Mannerly (Nannerl) Mozart is buried here as are Lorenz Hagen Auer (the Mozart family’s landlord and friend) and Sigmund Haffner (alderman, mayor and friend of the Mozart family).  The Haffner Serenade and Haffner Symphony were compositions by Mozart for the Haffner family.  Michael Haydn, composer and younger brother of Joseph Haydn is also buried here.

Some of the other Salzburg notable personalities buried here include Santino Solari (the architect and builder of Salzburg Cathedral), Harry Collins (the last commander of the American occupying forces who later lived in Salzburg and became one of the city’s honorary citizens) and the Furst family.

Many visitors come to Salzburg to see the famous landmarks and sites associated with the Sound of Music movie.  For those doing Sound of Music tours, St. Peter’s Cemetery is a place of interest.  Many will recognize the chapel where the Von Trapp family hid before their escape from the Nazis.

At St Peter’s Cemetery are also the Salzburg Catacombs, one of the special attractions here. Carved out of the Mönchsberg rock, they are said to be of early Christian origin.