You are here: Home / Archives for music in rome 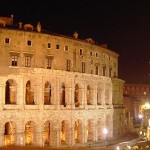 Classical Concerts at the Teatro di Marcello or Theatre of Marcellus in Rome: Teatro di Marcello is an ancient open-air theatre that was first planned by Julius Caesar towards the end of the Roman Republic. He however was murdered before the beginning of its construction. It was the Emperor … END_OF_DOCUMENT_TOKEN_TO_BE_REPLACED

Latest Additions from all countries

Where we’ve been is in green!