You are here: Home / Weather

When to Travel to The Netherlands: Weather and Seasons:

The Netherlands has a moderate maritime climate, with mild summers and cool winters. Its long North Sea coastline means that the sea has a moderating influence on temperatures, and the flat character of the country means that altitude is not an influential factor.

The average summer maximum is about 20°C (68°F), not too warm, while the average winter temperature is around 0°C (32°F). Although there is no set rainy season, with sufficient moisture in the air, it can rain at any time, so it’s best to be prepared!

Although still cool, March is generally the driest month of the year whereas July and August tend to be the hottest and wettest. When travelling in the Netherlands do as the Dutch do, which is to be prepared for changeable weather.

If you’re planning to visit Keukenhof, then your timing will be determined by when the garden is open – usually from about mid-March to mid-May. Spring is a beautiful time to visit the Netherlands as the iconic tulips are in full bloom, as are the daffodils and hyacinths. 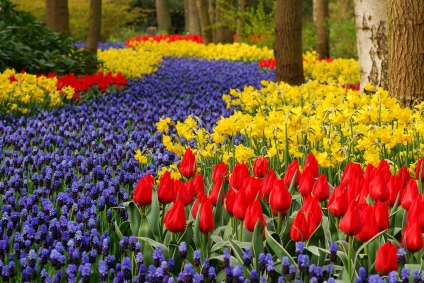 Since the abdication of Queen Beatrix in 2013, Koninginnedag, which used to take place on April 30, has now become Koningsdag (King’s birthday). King Willem-Alexander’s birthday is on April 27th and Koningsdag is celebrated on his birth date. Huge celebrations take place on this day, especially in Amsterdam, and if you don’t mind crowds, it’s worthwhile experiencing this special day of festivities.

Summer is festival time and if you don’t mind a bit of rain here and there, there is plenty to do in summer. The Dutch generally take their holidays in summer as well. Evenings can be cooler, so you may need a light jacket.

Like Spring, Autumn temperatures range between 10°C and 20°C.

The Winter months of December, January and February are cold with temperatures below freezing at night and daytime temperatures ranging from 0°C to no more than 10°C. Yes, it’s rug up time and you’ll need gloves, hat, coat, warm shoes, the works. Winter is the quietest time for tourism and visiting at this time of year has its benefits as accommodation may be cheaper and you’ll also have a quieter time when visiting museums, etc.

Although we said that weather in the Netherlands is unpredictable, one thing that is predictable throughout all seasons is that it can rain at anytime so a raincoat and umbrella are handy accessories to have. That said, the times that we’ve been in Amsterdam, we’ve always had blue skies!