You are here: Home / Destinations / Gouda – Famous for its Gouda Cheese

Gouda is Famous the World Over for its Gouda Cheese: 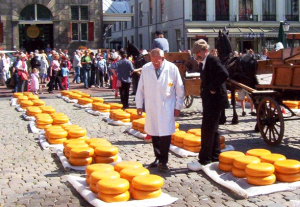 The name Gouda conjures images of bright yellow wheels of this Dutch cheese that is a common sight throughout the Netherlands. But more than just cheese, this typical Dutch city in the province of South Holland has plenty of history, old buildings and pretty canals that visitors will find a delight to explore.

A Slice of Gouda History

Gouda’s history can be traced back to the 11th century when the Van der Goude family built a castle on the Gouwe River. The area was originally marshland and a source for peat harvesting over the next two centuries. Gouda gained prominence as a city in 1272 when a canal was built connecting the Gouwe River with the Rhine delta. This allowed the shipment of goods to France and elsewhere.

Gouda had a successful brewing industry in the 15th century and the growth of the cheese industry in the 17th century brought more prosperity to the city. When a tax on cheese was introduced in 1667, it raised a lot of money for the town. The Waag (cheese weigh house) was built in 1668 so that the cheese could be weighed and tax collected.

All the main sites of Gouda are within the city centre which is encircled by a canal. The area is small and easily explored on foot. Kleiweg, the main shopping street, is pedestrianized and bike free. At the end of this street you’ll reach the Markt (market square). The Stadhuis (the oldest Gothic Town Hall in the Netherlands) and Waag (now a cheese museum) are located here and the Markt is also where the kaasmarkt (cheese market) takes place during the summer months. Plan on being here on Thursday mornings when the cheese market is in operation.

Things to Buy in Gouda

Gouda cheese is a must-try from the town after which the cheese was named. Another Dutch treat to buy here is the traditional and delicious Dutch stroopwafels. These were first made in Gouda in 1784. If you haven’t tried these Dutch wafers before, the Goudse stroopwafels go very nicely with coffee.

Gouda is also famous for its smoking pipes and Goudse kaarsen, the traditional Dutch candles.

There are not many hotels in Gouda as most visitors make day trips here. Hotel De Keizerskroon  is in the city centre and there are several other hotels that are about 4 to 7 kms away.  See here for complete list of Gouda hotels.

By Train – Gouda’s main station is 5 minutes walk to the Markt (market square).

By Bus – There are buses from Benschop, Bodegraven, Leiden and several other cities to Gouda. See the Connexxion website.

Now it's your turn. I want to know what you think. Comment below with a quick response...