You are here: Home / Destinations / Volendam – A Quaint Village in North Holland 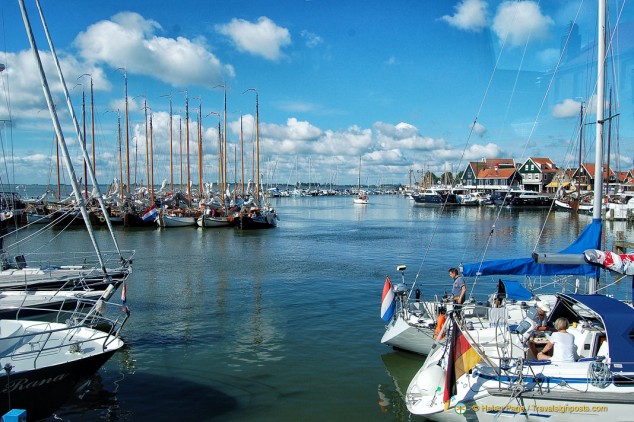 Volendam is a quaint village in North Holland that is well known for its old fishing boats, bustling waterfront and the traditional Dutch costumes that a handful of residents still wear. This charming and picturesque town was once an artists’ retreat and Picasso and Renoir both spent time here. Today, visitors come to this popular tourist destination to see its small, picturesque streets, antiquated houses and catch a glimpse of the traditional Dutch way of life.

Situated south of the mouth of the IJsselmeer, Volendam once served as the harbour for the nearby town of Edam. But when the people of Edam dug their own canal to the harbour in 1357, Volendam’s role as a harbour became redundant. The Volendam harbour was filled in and farmers and local fishermen settled on the reclaimed land, hence Volendam, meaning “filled dam”.

A Visit to Volendam

Volendam is about 20 kms north of Amsterdam and the trip up here was a nice change of scene from the Dutch capital. We got to see some of the Dutch countryside as we travelled to this rather isolated part of the Netherlands. 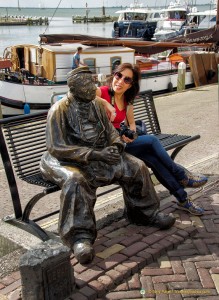 The Volendamers, we were told, are a very close-knit and hardworking community and fishing used to be the main industry here. This old fisherman I spoke to bemoaned the decline of its fishing industry and the village then turned to tourism for its livelihood. It must have been a difficult transition for the people, but from the prosperity of the village today, it would seem that they’ve done a great job with their transformation.

Apple Pie at the Spaander

Our first stop here was the Hotel Spaander for some coffee and apple pie. The Spaander refers to itself as an art hotel and all through the hotel, even in the toilets, you’ll see artwork that have been left behind by painters in exchange for the accommodation.

The Hotel Spaander dates back to 1881 and a walk through the hotel is like a stroll through an art gallery. Because of its art collection, the hotel itself has become a tourist attraction. The Art Hotel Spaander is situated on the banks of the lake and if you’re stopping in Volendam, this is a nice hotel to stay at.

With its many souvenir shops and fast food outlets, Volendam may seem like an over-touristy destination, but based on the number of visitors here, people still find it a charming place to visit. It also appears to be a popular stopping point for people on cycling holidays. 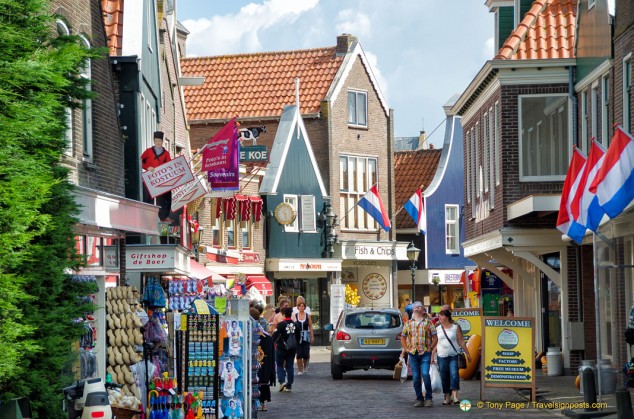 As we strolled through the village centre, and away from the waterfront, the narrow streets with their original small and antiquated houses hint at Volendam’s fishing past. The Volendamers claim to have the most beautiful women in the Netherlands so if you look through the lace-curtained windows, you might just be lucky enough to catch a glimpse of them. 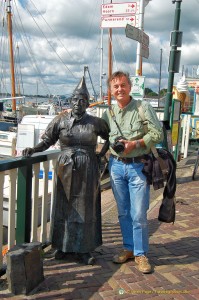 Tony and a Volendam resident

At the small Volendam museum you can learn more about this town’s history and clothing style. A small number of the older women in Volendam still wear the traditional Dutch costumes with the pointed bonnet. I didn’t see any of them, which is not surprising as Volendamers like keeping to themselves. But Tony found this old lady and befriended her.

If you fancy seeing yourself in a Dutch costume, and would like a souvenir of this place, you can have your picture taken in traditional Dutch costumes at this museum.

A local delicacy that Volendam is famous for is its smoked eel and along the waterfront is a seafood stand with stacks of smoked eel which the locals believe are a health food. Due to over-fishing, the eel population has dwindled significantly and Volendam has one of the last traditional smokehouses in Holland. If you like Dutch herring and eel, this is the place to try some.

The neatly stacked smoked eel look less creepy than the life ones, but my excuse is that it was a bit early in the day for tasting smoked eel. 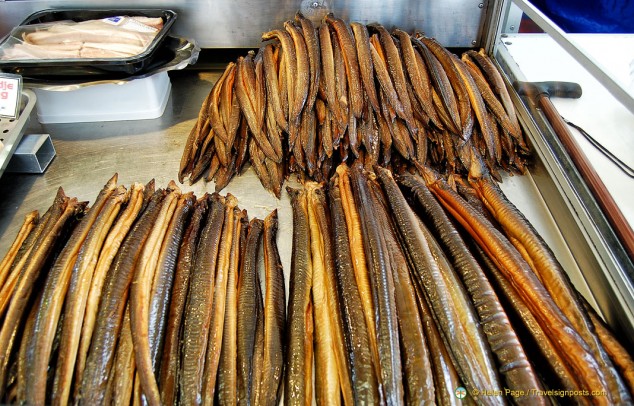 Volendam is known for its smoked eel

In the many souvenir shops, you can buy the usual Dutch souvenirs like wooden clogs, as well as old fashioned pipes, bags, etc. If you missed visiting a cheese farm, there is a large cheese shop here where you can sample and buy Dutch cheeses.

However, if you want to take home some unusual souvenir with you, how about some eel music. Volendam is also well known for its distinctive music, which is called Palingsound (literally “eel sound”) in reference to Volendam’s status as fishing village.

Souvenirs and shopping may not be your scene, in which case you can take a stroll along the famous Volendam Dike and enjoy the views of the lake.

There are no must-see monuments in Volendam and the village is a pleasant place to visit for its relaxing lakeside environment. Volendam is usually included as part of a half day tour from Amsterdam to the Dutch countryside to see its iconic windmills and cheese-making towns. From Amsterdam, there is a range of half day tours to choose from.

We like the Art Hotel Spaander for its history and art collection, but you can check out other Volendam hotels Here.

From Volendam we travelled to the nearby famous cheese-producing town of Edam.