You are here: Home / Getting around / Airport Transfer: Amsterdam Schiphol Airport (AMS)

Ground Transportation to and from Amsterdam Schiphol International Airport: 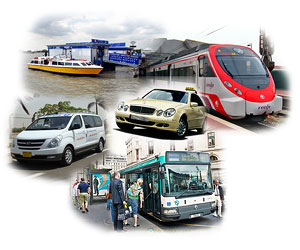 Amsterdam Airport Schiphol is the Netherland’s national airport and ninety airlines fly to and from Schiphol.  Schiphol Airport is situated approximately 20 km from Amsterdam city centre and you can reach the city from Schiphol in just half an hour by train, taxis or hotel shuttle.  For cheap airport transfers, there is also an extensive bus service.

Schiphol Airport has an extensive network of direct bus lines connecting the airport to surrounding towns and cities. Most of these bus connections are maintained by the Schiphol Sternet network. Service frequencies are good starting from early in the morning until late in the evening. Some lines also include a night service.

Travel times to and from Schiphol Airport seldom exceed half an hour. Passengers on all lines embark and disembark at Schiphol Plaza (directly in front of the Arrival and Departure Halls). There are also a limited number of special rush-hour services specifically for commuters.  For airport bus destinations and schedules, refer to Schiphol Sternet website at www.schipholsternet.com.

The Connexxion hotel airport shuttle service connects Schiphol Airport to more than 100 hotels in the city of Amsterdam between 06:00 and 21:00. Tickets are available from the Tourist Information and at the Connexxion Desk on Schiphol Plaza near the Arrivals Hall 4 and at your hotel. The hotel shuttles leave every ten minutes from platform A7, located immediately outside the Arrivals Hall.  Waiting time is less than 30 minutes.

Schiphol Station is situated directly below the airport. From here, intercities and slower trains from the Nederlandse Spoorwegen (Dutch Railways – NS) take passengers to Amsterdam Central Station (city centre), Amsterdam Zuid-WTC (World Trade Center) and Amsterdam RAI (Exhibition and Conference Centre RAI). These stations are a maximum of 25 minutes away.

Train tickets are available at the ticket office in the airport’s main hall and from the yellow ticket machines. The ticket machines are located near the baggage claims area, shopping centre at Schiphol Plaza and near the platforms. These machines accept Dutch cash cards, and some also accept coins, but not credit cards.

If you prefer a private airport transfer straight to your hotel, you can pre-book transfers through our partner companies:

Avis, Budget, Europcar, Hertz, National Car Rental and Sixt are the car rental companies at Schiphol Airport. They are located at Schiphol Plaza, directly behind the arrivals halls.

The taxi rank is located at the airport’s exit. You may be approached by drivers soliciting for fares from within the airport. These are not officially approved taxi drivers and it is strongly advised that you not go with these drivers. Depending on traffic, the taxi ride from the airport to the city centre takes about half an hour.

When booking taxis, you have a choice of Combined or Private Travel. If you choose combined transportation other people may travel with you to the airport. The taxi will stop at different addresses to pick up other clients.

There are a number of car-parking services, including valet parking, at Schiphol Airport and the rates range from Euro 4.8 per hour to Eur0 5.0 per day. So it’s advisable to check before you park.

What's your next move, after having read this post?