You are here: Home / Getting around / Venlo Railway Station – Venlo, Netherlands 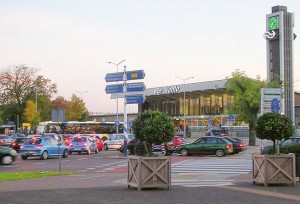 Venlo Railway Station serves the town of Venlo and is part of the Nederlandse Spoorwegen railway network, one of the Dutch railway operators. Although Venlo is a small town of only 90,000 people, it is well connected by train. This is because Venlo is a junction station and it is situated on railway lines such as:

How to Get to Venlo by Train

Venlo Railway Station is connected to major Dutch cities like Eindhoven, Roermond and Nijmegen. As Venlo is also a border town with Germany, there are railway links from Venlo to German cities.  Services that call at Venlo include:

Travel from Amsterdam to Venlo

In front of Venlo station there is a bus station for regional and city buses as well as a car park.  For those attending Floriade, there is a regular shuttle service from the station to the Floriade showground.

Venlo Railway Station was first opened in 1865 however the current building dates to 1958. The station building has a large clock tower and typifies a post-war era Dutch station.