Koninginnedag or Queen’s Day is the Official Birthday of the Queen of Netherlands: 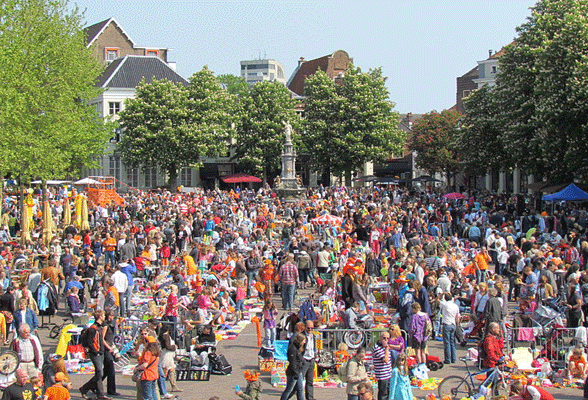 Koninginnedag or Queen’s Day (or Queensday) on April 30th is a national holiday in the Netherlands. On this day the entire country celebrates the official birthday of the Queen of the Netherlands.

Queen Beatrix’s birthday is actually on January 31st and April 30th is the birthday of her mother Queen Juliana. However, as the weather is warmer in April, Queen Beatrix has kept April 30th as the official date.

Koninginnedag is celebrated throughout the Netherlands but the big Queen’s Day celebrations are in Amsterdam. The partying and drinking start the night before which they call the Koninginnenacht (Queen’s Night).  All over the city there are parties, musical performances, concerts and entertainment on the canals.

If you’re in Amsterdam during the Koninginnedag celebrations, you’ll see orange everywhere – orange banners, people dressed in all kinds of orange gear and accessories and even orange coloured food and drinks. It’s oranjegekte or the “orange madness” in reference to the House of Orange, which the royal family belongs to.

A big feature of the Koninginnedag celebrations is the vrijmarktor “freemarket”. On this one day people all over the country are allowed to sell things in the streets without having to pay value added tax on their sales! People are allowed to set up stalls or have their goods on blankets in the parks or on sidewalks. It’s not just the car boot sales or flea market sales that are exempt from tax, commercial traders benefit from this one day of tax-free sales. Naturally, the amount of sales clocked up on this one day is huge. 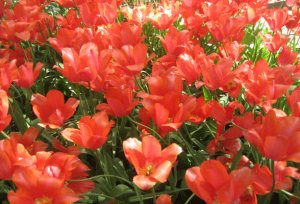 The city centre is closed to cars and people are encouraged to catch public transport to the city. Whilst additional trains will be put on to get people to the Amsterdam city centre and back home after the celebrations, the services will be re-routed to distribute the station loads.  For more information on how the transport will work see the Koninginnedag website.  It is in Dutch only but if necessary, you can print it and have your hotel concierge explain the schedules to you.

Spring is a marvelous time to be in Amsterdam. Not only will you get to share in the colourful Koninginnedag celebrations, it is also a fabulous time to see the famous spring gardens at Keukenhof.