You are here: Home / Shopping / Shopping for Genuine Blue Delft Pottery in Delft

Delft Is Famous the World Over for Its Blue and White Delftware: 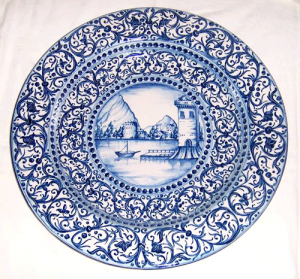 Delft is a city that pottery collectors will be familiar with.  This picturesque city in the South Holland province (Zuid-Holland) is best known for its blue and white tin-glazed pottery known as Delftware.

Delft pottery was introduced to the Netherlands by Italian migrant potters who brought with them their Majolica (Italian tin-glazed pottery) pottery skills.  They settled around Delft and Haarlem in the 16th century, making wall tiles to which they incorporated Dutch motifs such as flowers and animals as decorations.

In the early 17th century, when the Dutch East India Company was actively trading with the East, they brought home millions of pieces of pottery, including samples of very fine blue and white porcelain which became very popular.  From then on, demand for the coarser Dutch majolica fell away and Dutch potters began adopting the finer Chinese methods for their plates, vases and other pottery.  Fine Chinese porcelain was the rage in Europe during that period and there were 32 thriving potteries in Delft at that time.  Today only two remain – Delftse Pauw and De Porceleyn Fles.

If you love pottery, forget about the cheap imitations in the gift shops and make a trip to a Delft factory where you can learn more about Delft pottery as well as buy the genuine hand-painted traditional Delft pottery at factory prices.

If you are in Amsterdam, a more convenient way to get to Delft is to join a day trip to Delft which includes a tour of Delftse Pauw.  On the guided tour of the Delft factory you are taken through the phases of pottery production, the art of transforming clay into creative Delft pottery pieces and a visit to the painting workroom where the pottery are hand painted by talented pottery artists.

Then of course there’s time to buy the genuine Delfts Blauw pottery, pieces of jewelry and Christmas decorations all at the Delft factory prices.

What about you? What are your thoughts on this subject?