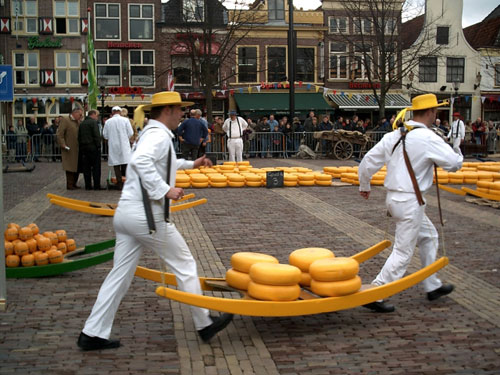 Although the earliest evidence of a regulation in relation cheese carriers in Alkmaar dates to June 1593, the city was known to have had a cheese weigh house as early as 1365. Cheese was an important trade for Alkmaar up till the First World War. During its boom period, an average of 300 tons of cheese were sold every market day at the Alkmaar Cheese Market, and trading in the market used to carry on till one o’clock in the morning. The Waagplein square where the Cheese Market takes place even had to be enlarged to keep pace with the size of the cheese trade.

With the mass production of Dutch cheese in factories these days, trade at the Alkmar Cheese Market is barely 10% of what it was at the start of the 20th century. However, what it has lost in volumes of cheese traded, it has made up in the number of tourists.

Alkmaar’s Cheese Market comes to live every year from April to September. The market takes place on Fridays on the Waagplein. Apart from the picturesque sight of rows of cheese piled in the square, there is the unusual sight of cheese trading and men in white outfits and coloured hats shifting wheels of cheese to the weigh house in the same traditional way that they have done for over four hundreds years. 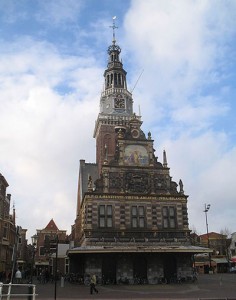 The vision of wheels of cheese being rushed to the weigh machine might seem colourful, but there are actually roles and protocols to observe in the Cheese Market. As you watch the show, try and observe some of the roles:

In addition to the above, there are inspectors, zetters, weighing masters and not forgetting the traders who still seal the deal with the clap of their hands.

How to Get to Alkmaar

Alkmaar can be reached by intercity train. From Amsterdam Central Station there are regular services and the journey takes just over half an hour.

A more convenient way to reach Alkmaar is to join a tour from Amsterdam. This Alkmaar Cheese Market tour includes a drive to Schermerhorn, a picturesque village with famous old windmills as well as a stop at Edam to visit this famous cheese factory.

So, what do you think?