You are here: Home / Sightseeing / Bloembollenstreek – The Bulb Fields of Holland

Bloembollenstreek – The Bulb Fields of Holland is a 30 km Stretch From Haarlem to Leiden: 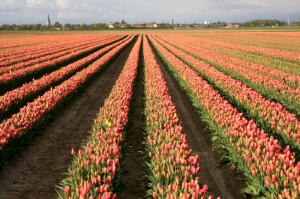 The Netherlands is famous for its tulips and other bulbous flowers like the daffodils, hyacinths, lilies, irises and lilies. In a 30 km area stretching from Haarlem to Leiden is Holland’s Bloembollenstreek or Bollenstreek (bulb district), the most important bulb-growing region of Holland.

Early bloomers like the crocuses start flowering at the end of January and herald the arrival of Spring.  This is the season to enjoy the most popular of Dutch flowers – the mighty tulip. From around mid-April the bulb fields of Holland are a spectacular sea of colour and this floral extravaganza is extended until late May by the late-blooming lilies.

Along this 30 km flower belt, there are many restaurants, cafes and bars as well as some interesting attractions such as:

If you don’t have a car, it is possible to rent a bike at Haarlem railway station and drop it off at Leiden Station.  Alternatively, you could rent a bike in Amsterdam and catch the train to Haarlem or Leiden.

But if pedalling around the tulip fields is not your cup of tea, it is possible to take a Keukenhof Gardens and Tulip Fields Tour from Amsterdam.