You are here: Home / Sightseeing / Coffeeshops in Amsterdam

In Amsterdam Coffeeshops Cannabis Are Openly Sold for Recreational Use: 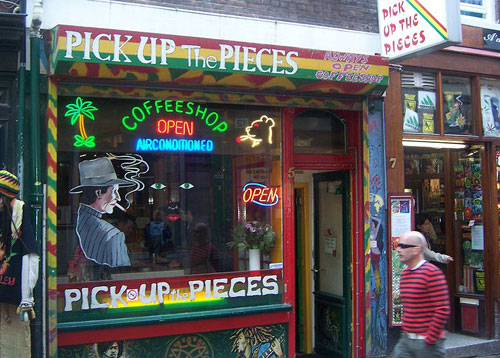 The Netherlands have for a long time had a tolerant and liberal attitude towards cannabis and although it is not legal, the sale and use of this soft drug is tolerated by the authorities. Soft drugs are those designated by the Dutch government as carrying an acceptable level of risk and include hash and marihuana. In the Netherlands, coffeeshops are alcohol-free establishments where soft drugs are sold and consumed. There are rules governing the operation of these coffeeshops, such as:

Many of the coffeeshops in Dutch municipalities openly sell cannabis, attracting customers from Belgium, France and Germany who make quick trips across the border as the ‘legal’ Dutch cannabis is of higher quality. New laws being introduced in 2012 will make it illegal to sell cannabis to foreigners.

But the Netherlands’ open policy on soft drugs is not without problems and controversies. There have been discussions and disputes on banning coffeeshops near schools, how to reign in the concentration of coffeeshops in some areas, fighting criminal activities and whether drug tourism is desirable. In October 2011, the government announced that coffeeshops will be banned from selling cannabis with higher than 15 percent THC. It is believed that around 80 percent of the cannabis sold in Amsterdam coffeeshops have an average THC concentration of 16.5 percent.

If you are interested in learning more about the world-famous Amsterdam coffeeshop and the politics surrounding drug consumption in Amsterdam, you can join an Amsterdam Cannabis Walking Tour and be enlightened by your guide. You must be 18 and over to do this walk.  And if you feel like a caffeine-fix after the walk, look for a koffiehuis (coffee house without the drugs).