You are here: Home / Sightseeing / A Cycling Adventure in Holland

Holland is a Cyclist’s Paradise! 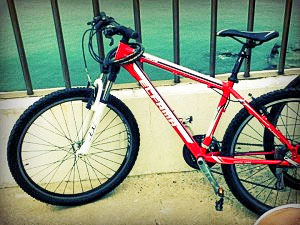 The Netherlands is well known around the world for its love of bikes – so where could be better for a cycling holiday in Europe? With great cycle highways (complete with their own traffic lights) and more bikes than people, Holland is a cyclist’s paradise.

This seven day adventure takes you along the North Sea coast past picture perfect scenes of canals and windmills to the vibrant city of Amsterdam, then on to the unspoiled island of Texel.

Thanks to the relatively flat terrain, you can cover a fair amount of distance on two wheels. There are cycle routes everywhere, with either a dedicated path for bikes or a cycle-only lane adjacent to the road.

Unlike in the UK, you’ll have right of way as a cyclist at crossroads and roundabouts, but it still pays to be careful at major intersections.

There are several route systems, although you’ll use the the long distance LF (landelijke fietsroutes) roads the most. Although it’s in Dutch, this LF map website is relatively easy to use as the place names are often the same as in English. You can pick up a map of LF and smaller routes at any tourist information shop in Holland, usually signed VVV. 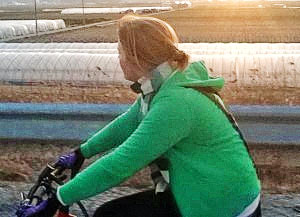 On the road in Holland

We took the ferry across from Harwich in the UK to the port of Hook in Holland so were able to bring our own bikes over. If you want to hire when you arrive, there are a handful of places in the town of Hook. Try K.v.d. Burg, Prins Hendrikstraat 235-241 (0174 382318) when you get off the boat.

Be aware that Dutch bikes are often single speed and you will have to pay more for a touring bike with gears. Some city bikes also have back pedal brakes, which can be tough to get used to. Make sure you take the rental for a quick spin to double check you’re comfortable with the style and all the parts are in good working order before you pay up. 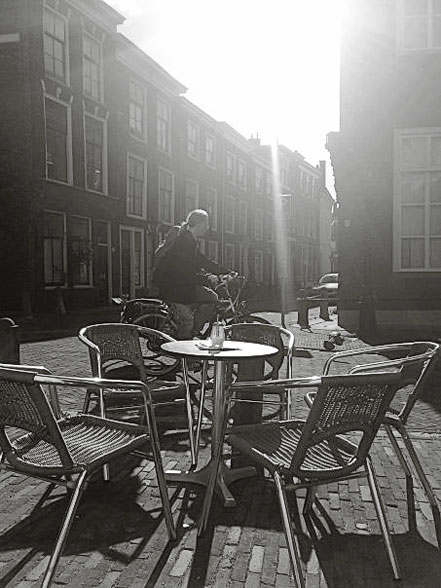 At a coffee shop in Leiden

Starting from the ferry port in Hook of Holland, it’s about 30 miles to the city of Leiden which is a good distance to break in your pedalling legs on the first day. Take the LF1 north – a wonderful scenic route along the coast through the dunes. At Katwijik, a pretty little town by the sea which makes a good pit stop for coffee or lunch, turn east inland and follow the canal to Leiden.

Leiden is a fantastic place to stay the night. The university town is as quaint as Amsterdam and has all the coffee shops, bars and restaurants, but has managed to escape the stag parties and crowds. It feels laid back and friendly and there are some great spots, such as the beautiful Botanical Gardens, to relax for the afternoon after your journey. 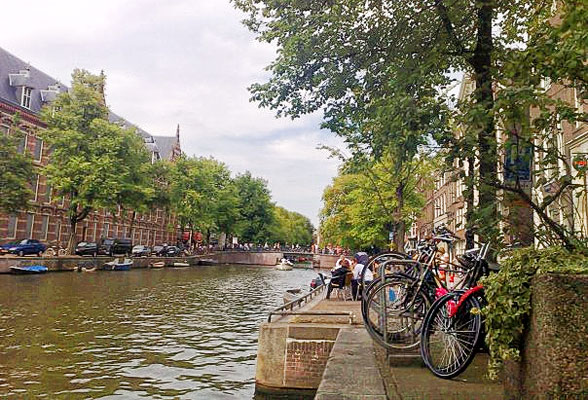 No holiday in the Netherlands would be complete without a stop in Amsterdam. From Leiden, the LF2 runs all the way to the capital. Winding on narrow paths past canals and windmills, it’s a beautiful ride of about 30 miles. Along the route, you’ll need to cross some of the waterways, which is fortunately very quick, cheap and easy by ferry.

In Amsterdam itself, the excellent cycle routes continue and you’ll have no trouble navigating your way around the paths to the centre of the city. We spent an extra day here relaxing, sightseeing and biking around Amsterdam before heading further north. The leafy, bohemian area of Jordaan is a great place for a laid back day tour, or you could try the ‘museum loop’ through the city centre and hop from art gallery to museum.

After a few days surrounding by crowds, it’s refreshing to head back out on the road, and the path to the northernmost tip of Holland is an unspoiled paradise of undulating sand dunes and chocolate box villages. The journey to Den Helder is a longer 50 mile trek, but after a bit of recovery in Amsterdam it’s easily completed in a day. 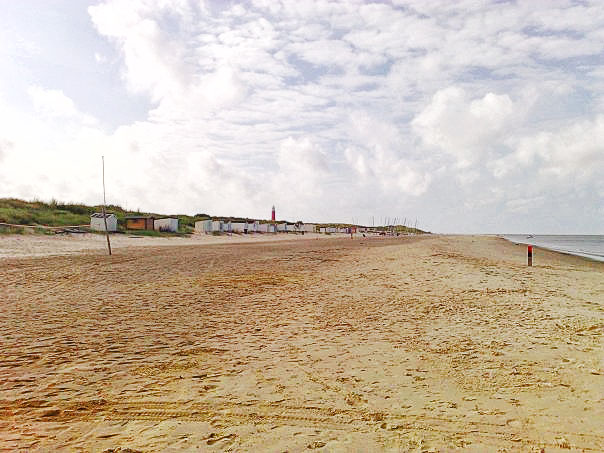 If you’re feeling tired, you can make a stop off at Den Helder, which is a modern town with shops and restaurants, to refresh you. The main reason for coming here, however, is the ferry to Texel, which takes around 20 minutes from the port. The largest of the Wadden Islands, Texel is a remote, beautiful spot for riding – and about as far from the tour groups in Amsterdam as you can get!

Pine forests, tulip fields and sandy beaches stretch before you, and you’re more likely to see spoonbills and gulls on the road than cars. De Koog has the best beach and plenty of places to sleep or relax in a beachfront café with a beer, although Den Burg is a little livelier with its street market and shops.

As an alternative to retracing your steps, trains run regularly from Den Helder to Amsterdam and take 75 minutes. It’s easy to bring your bike with you, just buy a ‘day pass’ for the bike for a few Euros and you’re allowed it on any train in Holland that day. From the capital, you could take a train directly back to Hook (about 1.5 hours) or just go as far as Leiden before cycling the last few miles. There’s a great route via The Hague and Delft for some last minute photo opportunities.

Alice Woolliams is the Editor for Enjoybedandbreakfast.com, a travel website for accommodation with personality in the UK. The website offers a growing selection of quaint B&Bs, charming inns, small boutique hotels and guest houses. You can find her on twitter @enjoybnb when she’s not travelling the world!