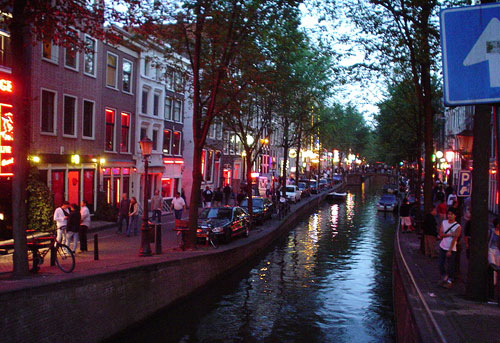 For some, one of the most exciting (or some may say, ‘sexciting’) districts in Amsterdam is its Red Light District.

Amsterdam’s Red Light District is famous the world over and has long been one of the city’s major tourist attractions. And it’s not just those in search of sexual adventures who come to check out what the locals call the ‘little walls’ (de Walletjes); the city’s unique ‘window brothels’ attract interest from many curious tourists who come to take a peek at Amsterdam’s darker side.

The largest and best-known red light district in central Amsterdam is De Wallen or ‘the Quays’ in English.  Set in the oldest part of Amsterdam, de Wallen has historically been an important centre of prostitution.

As far back as 1413, the district was assigned to prostitutes for touting their trade. The red light area covers a network of narrow lanes criss-crossing several blocks south of Amsterdam’s oldest parish church, Oude Kerk, and crosses several canals. You’ll also find garish sex shops, a sex museum, sleazy clubs and shows in this area as well as some of the famous Amsterdam ‘coffee shops’.

With the legalization of prostitution in the Netherlands in 2000, the government thought that they would be able to better protect the industry from those who exploited and abused the prostitutes. But far from containing the exploitation of the sex workers, the legalized Red Light District trade has in fact attracted criminal elements and people smuggling.

To reduce crime in the city centre the authorities have cut back quite substantially on the number of window brothels that are allowed to operate in the area. Amsterdam’s window brothels and coffee shops will still be a part of the city’s character, however with the reduced and controlled numbers, they will no longer dominate.

Not all the narrow lanes of De Wallen are safe to explore on your own at night, but if you are curious to see the area you can join a Red Light District Walking Tour that will take you pass monuments and enter narrow old streets such as the well-known Zeedijk Street. In the past this was one of the most dangerous streets in Amsterdam, where sailors could be found searching for local amusement.  Nowadays, the shady bars of  the past have been replaced by lively pubs and restaurants.

The walk includes a visit to the Prostitute Information Center, where you will be offered a free drink and you can chat with a former prostitute who will explain the system and answer any questions you may have. Your safety is guaranteed on this walking tour.