You are here: Home / Archives for koningsdag 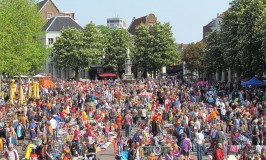 KONINGSDAG OR KING’S DAY IS THE OFFICIAL BIRTHDAY OF THE KING OF NETHERLANDS: Since 1949, the Dutch have been celebrating Koninginnedag or Queen’s Day (or Queensday) on April 30th.  All that changed on April 30, 2013 when King Willem-Alexander became the first male monarch since 1890. Koninginnedag becomes Koningsdag and is celebrated on King Willem-Alexander’s birthday […]