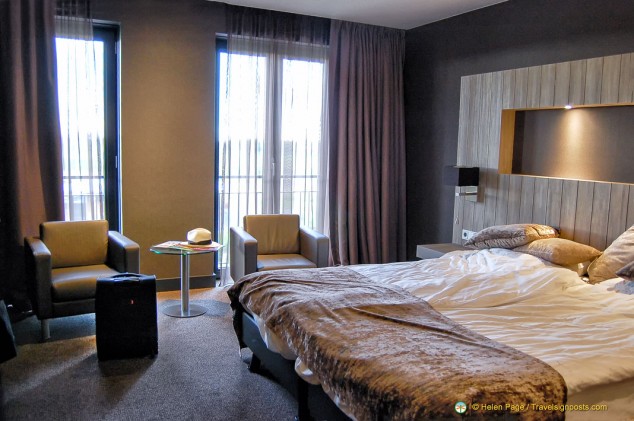 Our third floor room – sorry we forgot to take a shot before using the bed!

The hotel is situated on the Walcheren Peninsula and for most of us who were not familiar with this part of the Netherlands, the hotel seemed to be in the middle of nowhere. It was too far to walk to the Middleburg city centre and it was also a bit far to walk to the Zeeland beaches.

Some of our fellow travellers were disappointed with the location as there were no attractions or anything worth seeing in the hotel’s vicinity. But what the Van der Valk Hotel lacks in location, it more than makes up for in its room and dining facilities.

The room that we were allocated was at the far end of the first floor next to the car-park area. The hotel room key didn’t work and Tony had to make the long walk back to the reception twice to have it re-keyed. When we finally entered the room we found that there were cars parked right in front of our window. So Tony went back to the reception for a third time and asked for a different room and they kindly gave us a room on the third floor. There are 120 rooms at the Van de Valk Hotel and our room was spacious, and the bathroom was quite luxurious. 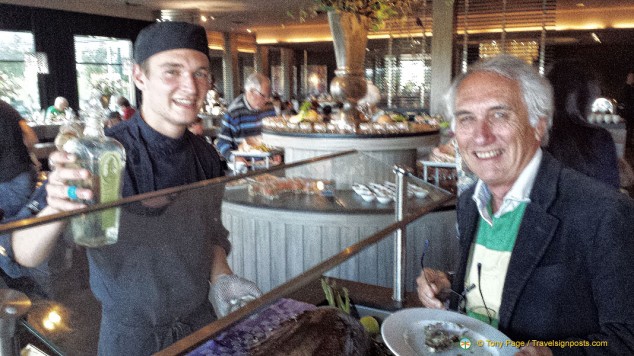 The young guy wasn’t very fast at shucking the oysters – this wasn’t his regular job – otherwise we would have polished off his supply of oysters quite quickly.

What we didn’t know was that on Friday and Saturday nights, they have what they call “Live Cooking” buffet. There was the usual big spread of food that you find at buffets, but on “Live Cooking” nights you can also choose your own meat or seafood and have it specially cooked for you in woks. 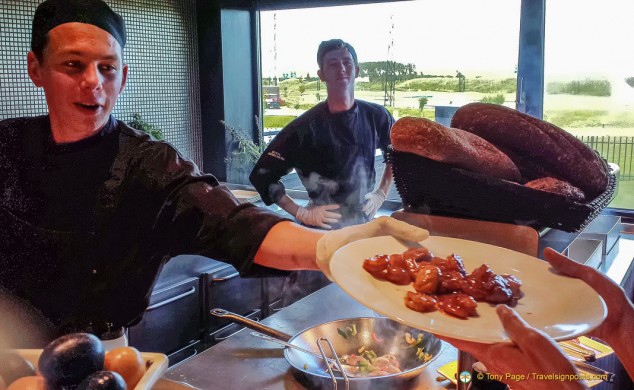 There was a combination of sauces and we asked for the spicy one for our prawns. When the chef understood that we wanted more spice in ours, he went and got sambal oelek and we had heavenly spiced prawns. There was a good spread of salad to accompany your main meal.

All the food here were very nicely presented. Tony had a nice selection of cheese for dessert while I had a scoop of ice-cream.

The food at this buffet was really good, one of the best hotel buffets I’ve tasted.

The huge dining room was full and it appears that locals must come here to enjoy the buffets on Friday and Saturday evenings.

What we particularly liked:

What we were not keen on:

If you’re travelling through this region of the Netherlands, the Van der Valk Hotel is worth stopping at for its comfortable rooms and the weekend buffet dinner.

Looking forward to your comments...