You are here: Home / Destinations / Edam – Better Known for its Edam Cheese

There is More to Edam Than Its Famous Edam Cheese:

Edam is a city in the province of Noord-Holland that is famous for its cheese of the same name. Long before many of us would step on the shores of the city of Edam, the round ball of Edam cheese, coated in red paraffin wax, would already have made an impression on us.

The Origin of Edam

The origin of the name Edam is pretty simple. In the 12th century, the city was founded around a dam crossing on the river E or IJe and hence Ijedam. In the early days, the inhabitants used to charge a toll for goods that had to be shifted between vessels at the dam and from there on Edam went on to become a trading town and prospered from shipbuilding and fishing.

Many visitors are attracted to Edam by its cheese and Kaasmarkt (Cheese market) but there is certainly more to Edam than just Edam cheese. The city is rich in history and exudes of old-world charm. Edam’s old town centre, within the old city walls, is heritage protected and many of its medieval architecture are still in good form. A rare example of a Gothic wooden house, presumed to have been built around 1530 AD. can be found in this city.

Visitors taking a relaxed stroll around Edam’s cobbled streets will see a variety of well preserved facades, typical Dutch squares, peaceful canals, bridges and historic and medieval buildings. Some of these well preserved buildings include St. Nicholas Church, the Town Hall and the Church of Our Dear Lady. The Edam Museumis located in Edam’s oldest brick house which was built around 1530. 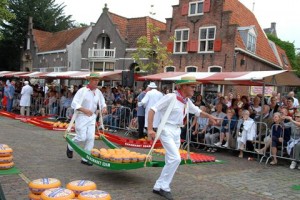 Like in Gouda, the cheese market in Edam is staged for tourists these days. It is held on the Jan van Nieuwenhuizen Square each Wednesday from 10:30 to 12:30 during the months of July and August.

Being less than 20 km from Amsterdam, many visitors make day trips to Edam. However, for those who plan to spend a couple of days in this city, The Hotel & Restaurant de Fortuna is one of the few hotels in central Edam. Set in five characteristic Noord-Holland houses, it provides for a cozy stay. You can also check out other Edam and nearby Volendam hotels Here.

How to Get to Edam from Amsterdam